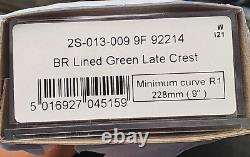 The British Railways Standard Class 9F 2-10-0 is a class of steam locomotive designed for British Railways by Robert Riddles. The class was given the nickname of'Spaceships', due to its size and shape. At various times during the 1950s, the 9Fs worked passenger trains with great success, indicating the versatility of the design, sometimes considered to represent the ultimate in British steam development.

Several experimental variants were constructed in an effort to reduce costs and maintenance, although these met with varying degrees of success. They were also capable of reaching speeds of up to 90 miles per hour (145 km/h). The total number built was 251, production being shared between Swindon (53) and Crewe Works (198). The last of the class, 92220 Evening Star, was the final steam locomotive to be built by British Railways, in 1960. Withdrawals of the class began in 1964, with the final locomotives being withdrawn from service in 1968, the final year of steam traction on British Railways.

Nine examples have survived into the preservation era in varying states of repair, including Evening Star. They were generally thought of as very successful locomotives, O. Nock stating The'9F' was unquestionably the most distinctive and original of all the British standard steam locomotives, and with little doubt the most successful. WHAT'S INCLUDED WITH THE MODEL. A BRAND NEW 2S-013-009 BR CLASS 9F.