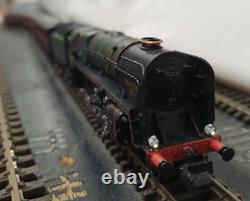 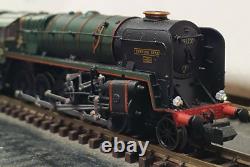 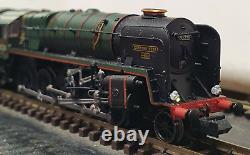 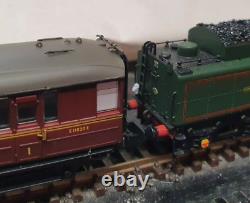 COMPLETE CONVERSION OF A BRAND 2S-013-010 9F 92220 THE PINE EXPRESS EVENING STAR WITH 4 GRESLEY MAROON COACHES TO DCC SOUND, LAMPS AND FIREBOX. Brief History of the Loco. The British Railways Standard Class 9F 2-10-0 is a class of steam locomotive designed for British Railways by Robert Riddles.

The class was given the nickname of'Spaceships', due to its size and shape. At various times during the 1950s, the 9Fs worked passenger trains with great success, indicating the versatility of the design, sometimes considered to represent the ultimate in British steam development. Several experimental variants were constructed in an effort to reduce costs and maintenance, although these met with varying degrees of success. They were also capable of reaching speeds of up to 90 miles per hour (145 km/h).

The total number built was 251, production being shared between Swindon (53) and Crewe Works (198). The last of the class, 92220 Evening Star, was the final steam locomotive to be built by British Railways, in 1960. Withdrawals of the class began in 1964, with the final locomotives being withdrawn from service in 1968, the final year of steam traction on British Railways. Nine examples have survived into the preservation era in varying states of repair, including Evening Star. They were generally thought of as very successful locomotives, O.

Nock stating The'9F' was unquestionably the most distinctive and original of all the British standard steam locomotives, and with little doubt the most successful. A FULL CONVERSION OF A BRAND NEW N GAUGE DAPOL 2S-013-010 9F 92220 THE PINE EXPRESS EVENING STAR TO DCC SOUND USING A LOKSOUND 5V MICRO. LIGHT BAR READY 4 GRESLEY MAROON COACHES WHICH CAN BE UPGRADED TO DCC. TWIN 12 X 8MM SPEAKERS.

SOUND FILE PROVIDE BY BR SOUNDS. Front and Rear Oil Lamps. Class A Lamp Code with rear red lamp (Turned off with F16). The locomotive will start to push a wagon, coach, etc a short distance at approximately 15 mph scale speed, before returning to its original position.

For use with automatic uncoupling track sections, magnets etc. A replacement for the Dynamic Braking as seen on CR Signals locomotives fitted with the LokSound V4. Service Brake is your standard brake mode, and will decrease the stopping time by approximately 80%, giving the user more control over deceleration.

Activating the Service Brake will also start to steadily reduce and limit the speed of the locomotive to approximately 45mph (about half the top speed), giving the user the ability to "Cruise" the locomotive at a steady pace, without adjusting the throttle e. On the approach to the station or junction, you can leave the throttle wide open, and activate F5, the locomotive will start to slow through the station, once the locomotive has cleared the station you can deactivate F5, and the locomotive will start to power away. Referred to as "Brake 1" by ESU. Shovelling & Firebox Glow (If Fitted). Rear Light On / Off (If Fitted). Front Oil Lamp and Red Lamp. Displays a J Head Code, Rear lamp turned off with F16. Displays a K Head Code, Rear lamp turned off with F16. Light Engine / Heavy Train Modes. With F22 switched off (the default setting) the locomotive will behave as if it is running without load (Light Engine), quickly accelerating away and stopping in much shorter distances.

Activating F22 will switch the Locomotive into Heavy Train Mode, greatly increasing the acceleration times, and simulating the amount of power the engine needs when accelerating. It will also significantly increase the stopping distances of the locomotive, when compared to Light Engine. Referred to as "Optional" and "Primary" load by ESU. Reduces the braking distance by 40% and limits the top speed to approximately 30mph.

Referred to as "Brake 3" by ESU. This item is in the category "Collectables\Model Railways & Trains\Railways & Trains\Locomotives". The seller is "cr_signals" and is located in this country: GB.