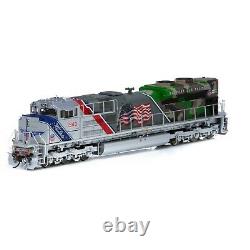 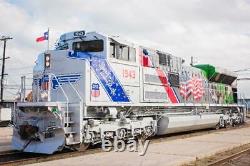 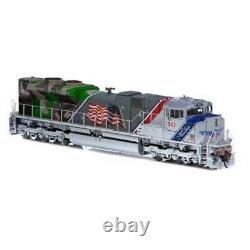 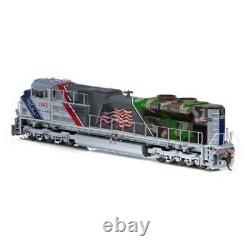 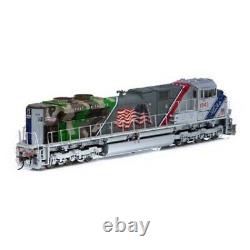 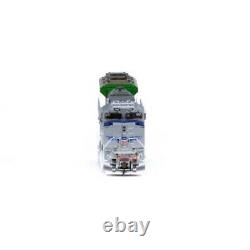 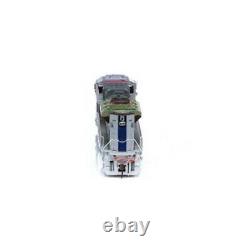 Nose mount headlight and ditchlights now LED. A Boeing B-17 was christened the Spirit of the Union Pacific in 1943, recognizing employees who funded it through war bond contributions. The Spirit of the Union Pacific was assigned to the 571st Bomber Squadron and shot down on its fifth mission during a raid on enemy installations in Münster, Germany.

1943, The Spirit, is the 16th commemorative locomotive introduced in the 155-year-old companys history. The Spirit honors the United States armed forces and the men and women filling their ranks. Created in collaboration with Union Pacific veterans, the locomotive illustrates the railroads connection to the thousands of veterans who helped build America through the centuries. Every detail in The Spirits trade dress incorporates a piece of each U.

The Spirits front is symbolic of Air Force Silver, and the blue stripe is a reflection of the former Strategic Air Commands nose sash. The lettering inside the sash is the original hand-drawn font used on the B-17.

It is followed by the Coast Guards Racing Stripe and the Navys Battleship Gray, which frames Union Pacifics traditional American flag. The military camouflageis a nod to the Army and Marines.

As the train passes by, the final message on the tail is dedicated to U. Prisoners of war and those missing in action, featuring the POW/MIA symbol and its motto, You Are Not Forgotten. SD70ACe AND SD70M-2 SPECIFIC FEATURES. New for the SD70ACe and SD70M-2, LED lighting. Front and rear trainline air hose with silver tips.

Many functions can be altered via Configuration Value (CV) changes. CV chart included in the box. In order to meet stricter diesel locomotive emissions standards imposed by EPA Tier II regulations, EMD modified the SD70MAC to create the SD70ACe and SD70M-2. Each model is powered by a 16-cylinder, 4300-horsepower diesel engine.

On the SD70M-2, the prime mover drives an alternator and produces AC current that is rectified to DC current, which powers the traction motors. On the SD70ACe, the DC current is then "chopped" back into AC to power the traction motors. Much of the external design is based on the SD90 series locomotives. Similar features include the full height nose door and rectangular windshields, the large flared radiators with two fans, and the positioning of the dynamic brake equipment at the rear of the long hood. In addition, the inverters were moved from inside the long hood to a box on the walkway behind the firemans side of the cab. Spirit of the Union Pacific. The item "Athearn ATHG01943 HO SD70ACe DCC & Sound Union Pacific Spirit of UP #1943" is in sale since Friday, December 11, 2020.