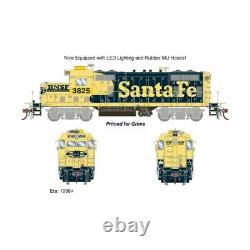 You are purchasing a new. Athearn Genesis ATHG65043 HO GP7u DCC Ready, BNSF #3825 Primed For Grime. The photo of this unit with the BNSF underneath the road number on Athearn's website is incorrect.

The correct placement is in my picture above. ROADNAME AND ROAD NUMBER SPECIFIC FEATURES. Rubber MU hoses for durability. The effort continues to enhance Athearn Genesis models per customer requests and feedback.

There has been a lot of activity behind the scenes; were excited to include new features often requested, to the GP7/9 and upcoming Genesis models. Former ATSF GP7Us with Topeka cabs, low noses, & modified side skirts. Sinclair antenna with ground plane. Both raised and lowered drop steps are included with model. Faded paint colors and patches matched to prototype photos.

Front headlight with or without glare shield per prototype. After the merger, BNSF continued to use their remaining GP7Us in branchline and secondary service. However, many years of service began to take their toll on the appearance of the units. They often exhibited faded coats of Santa Fe blue & yellow, various types of BNSF patch lettering, and replacement parts.

Packaging securely holds the model for safe storage. PRIMED FOR GRIME MODELS FEATURE. Duplicated look and feel of In Service equipment; Tattered and Torn just like the real thing. Faded base colors matched to the prototype.

Patches applied and shaped per road number matching each corresponding side to the prototype. Perfect starting point for adding grime and rust. In 1949, EMD introduced the GP7. The basic design followed most diesel switchers with the addition of a short hood instead of an end-cab. The hoods were also full height to better accommodate the diesel engine and mechanical and electrical components.

In 1954 EMD upgraded the GP7 to become the 1,750 horsepower GP9. Externally, the first GP9s were virtually unchanged from the last GP7s. Later versions would include different louver arrangements and the last ones would come without the frame skirting.

The GP9 was available with all of the fuel tank, steam generator, and dynamic brake options as the GP7, including torpedo boats. Many railroads chose to rebuild their GP7s and GP9s for continued service. Often times, it was cheaper to do this rather than purchasing brand-new locomotives. The item "Athearn Genesis ATHG65043 HO GP7u DCC Ready, BNSF #3825 Primed For Grime" is in sale since Friday, December 18, 2020. This item is in the category "Toys & Hobbies\Model Railroads & Trains\HO Scale\Locomotives".