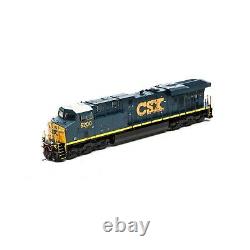 Operating lighting functions with F5 and/or F6. Program a multiple unit (MU) lashup with lead unit only horn, bell, and lights. Many functions can be altered via Configuration Value (CV) changes. In 2002, GE released the first of a new series of locomotives that would replace the popular Dash-9 series. The ES44DC and ES44AC, commonly called GEVOs for General Electric Evolution series, were designed to meet the stricter diesel locomotive emissions standards imposed by the EPA Tier II regulations.

To meet the new standards, GE developed the 12-cylinder GEVO 12 engine. Both the bore and stroke were increased to produce the same 4400 horsepower as the older 7FDL16 16-cylinder engine. The new engine drives an alternator producing AC current that is rectified to DC current. On the ES44DC, this powers the traction motors.

On the ES44AC, the DC current is chopped back into AC to power the traction motors. The two models share a common 73 2 frame and external appearance. The ES44DC and ES44AC external details have changed with almost every years new orders. These models are of the early version produced in 2005 and 2006 and include the nose door on the left side, two widely-spaced dynamic brake vents, X-panels on the electrical cabinet, side grab irons on the long hood and flush-mounted top radiator grilles and radiator compartment doors.