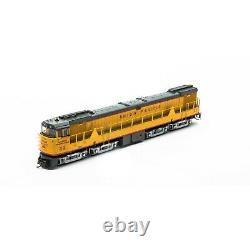 Razor sharp painting and printing. McHenry scale knuckle spring couplers installed. In 1963, under the leadership of Union Pacific's Superintendent of Motive Power, David Neuhart, the railroad went shopping for a single unit diesel locomotive with 5,000 or more horsepower. His staff had done a study and found that maintenance costs on a diesel locomotive were the same regardless of horsepower. In 1963, the diesel horsepower race had just reached 2,500 horsepower and the only way to get 5,000 horsepower was by putting two diesel engine and generator sets onto one chassis.

Given the wheel slip and traction motor technology at the time, eight traction motors and powered axles were needed to convert the horsepower into pulling power. EMD had already produced the DD35, two cabless GP35s on one chassis. General Electrics answer was to do the same with two U25Bs, which created the U50. The U50 was 83 feet 6 inches long and towered over most contemporary locomotives at 15 feet 10 inches tall. They weighed in at 559,620 pounds and produced 139,175 pounds of starting tractive effort. Inside the hood were two FDL-16 diesel engines, each with a generator, full radiator, and dynamic brake setup. The U50 rode on a two sets of two-axle AAR-B trucks mounted on a span bolster.

The trucks were recycled from the scrapped gas turbines. Up front was a tall, blunt nose cab without a front walkway, which gave the U50 its unique appearance. The first three U50s, UP 31, 32, and 33 were built in October 1963. UPs second order for twelve units, number 34 through 45 followed in 1964 with five built in July, five in August and the last two in September.

The final UP order for eight units, numbers 46 through 53 were delivered in 1965 with two built in May, three in June, two in July and the last U50 was built in August. For the first few years, the U50s ran over most of the UP's main line.

After 1967, they were concentrated east of North Platte, but still ran system wide. Seventeen U50s were retired between September 1973 and February 1974.

Three more were retired in November 1974, while the final three, numbers 45, 51, and 53, lasted until 1977. The units racked up between 740,335 miles and 1,091,626 miles in their service careers. Southern Pacific was also looking for a more powerful locomotive to handle their mountain grades. This search would lead to experiments with Krauss-Maffei and Alco hydraulics, and an order for three U50s, numbers 8500 through 8502. The first two were built in May 1964, and the third in June 1964. After initial testing system wide, the U50s were assigned to the Sunset Route between Texas and Southern California. The units were renumbered 9550 through 9552 in 1965 and again, in 1969, to 9950 though 9952.

In the 1970s, the SP U50s were assigned to Southern California hauler service, pulling interyard transfers mostly between Taylor Yard in Los Angeles and West Colton. 9950 was retired on May 18, 1978 and the other two on December 28, 1978. The item "Athearn Genesis HO G41057 U50 Union Pacific #32 DCC and Sound Equipped New" is in sale since Monday, October 4, 2021. This item is in the category "Toys & Hobbies\Model Railroads & Trains\Railroads & Trains\Locomotives".