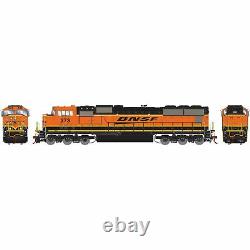 These were some of the last Santa Fe lettered engines built before the BNSF merger. SD75M body with turbo bulge. Two grab irons on cab roof. Right side nose door without window. Large and small Sinclair antennas.

These were former ATSF and BNSF Locomotives. Units were acquired in September 2014 via NRE.

All PRLX locomotives are Primed for Grime with road numberspecific patches and fading. The 20+ year old units were definately past their prime at this point; however, most of them still had a future. In addition, Progress Rail Leasing (PRLX) bought a large group of the units.

They arrived to PRLX wearing several paint schemes, including the Santa Fe Warbonnet as well as BNSFs Heritage II paint. The units were hastily patched and placed into service; as of this writing they are leased to CN and KCS, but future leasing assignments are likely. BNSF RED & SILVER FEATURES. In-service version with FRA yellow reflectors on sill and anti-skid on nose. Different-colored replacement radiator fans per protoytype road number. Overhauled by Progress Rail; repainted into BNSF Heritage III scheme. Currently in service on the BNSF.

Sound units operate in both DC and DCC. Engine, horn, and bell sounds work in DC.

All functions NMRA compatible in DCC mode. Program a multiple unit (MU) lashup with lead unit only horn, bell, and lights. Many functions can be altered via Configuration Value (CV) changes. CV chart included in the box.

Continuing upon the successful SD60-series, in 1992 EMD debuted the next step in locomotive evolution with the SD70-series. While outwardly similar at first glance to the SD60M, the D. Drive SD70M featured several external design refinements from the predecessor model. Battery boxes were relocated to the left-hand side walkway immediately behind the cab, a large, boxy forward traction motor blower housing replaced the angular version used on SD60s, the raised walkway duct on the left hand walkway was eliminated, and an intake for the rear traction motor blower on the left hand side of the carbody, directly under the rear radiator intake grill, was added.

Internally, the SD70 boasted improvements as well; a 16-710GB prime mover, rated at 4,000hp, was coupled to a new alternator design, the AR20. New D70TR traction motors were standard, and controlling all of this power and locomotive function was EMDs new EM2000 microprocessor, which boasted more memory, twice the processing speed, and improved locomotive self-diagnostic capabilities compared to the processor suite used in the SD60.

Even more revolutionary was the inclusion of EMDs patented Radial truck design, the HTC-R. This design, which made its debut under EMD Demo SD60 #3, replaced the venerable HT-C truck, and is unique in its ability to shift, or steer, the wheelsets laterally through curves, resulting in greatly reduced wheelset and track wear, and coupled with the new D70TR traction motors and EM2000 microprocessor, greatly improved adhesion. These units travelled all over North America, showing off the latest technology from EMD. Southern Pacific, Union Pacific and eventually Norfolk Southern would sign up for the SD70M models. By 2004 the SD70M began to be delivered with the familiar flared radiator grilles.

Both NS and UP have examples of these locomotives on their roster, and you can still find the entire fleet of SD70Ms in regular service today. The item "Athearn HO SD75M Locomotive with DCC & Sound BNSF Late Heritage #273 ATHG70650" is in sale since Saturday, January 30, 2021.

This item is in the category "Toys & Hobbies\Model Railroads & Trains\HO Scale\Locomotives". The seller is "rchobbyexperts" and is located in Saint Paul, Minnesota. This item can be shipped worldwide.