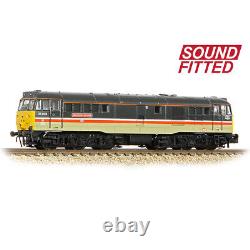 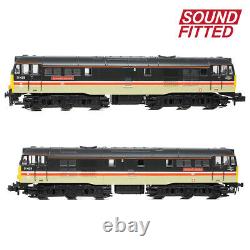 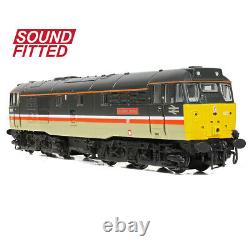 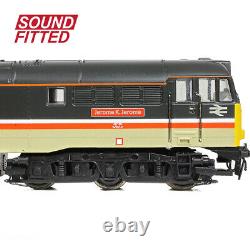 Bachmann 371-135DBSF N Gauge Class 31/4 31423'Jerome K. Jerome' BR InterCity Mainline DCC Sound Fitted. The first Class 31 entered service in November 1957 and the design was one of the Pilot Scheme locomotives ordered by British Railways to replace steam traction. The Class was originally allocated to the Eastern Region, but gradually became common on both the Western and London Midland regions too.

The Class 31/1s were the standard locomotives, distinguished from the first batch of locos - the 31/0s - which had Red Circle multiple-working control equipment, a non-standard feature that led to them being withdrawn relatively early in the late-1970s. The 31/1s were fitted with Blue Star multiple-working equipment, as found on many other BR classes, and all had steam heating boilers from new, making them ideal for hauling passenger services. Commonly used in East Anglia, with allocations at Stratford and March depots, they were also found throughout the Eastern Region of BR with Finsbury Park sporting a large allocation, along with the depots at Tinsley, Immingham and Thornaby. Examples were also allocated to Bristol Bath Road and Old Oak Common on the Western Region, where they could be found working passenger trains as far west as Barnstaple and Paignton. In the early 1980s, Healey Mills and Bescot on the Midland Region also gained an allocation as replacements for Class 25s.

During the 1970s some Class 31s were fitted with Electric Train Heating (ETH) and these were reclassified as 31/4s to denote this feature. The 1980s would see BR undertake a programme of refurbishment for much of the fleet, this included the fitting of ETH to more locomotives but refurbishment was not reserved exclusively for the 31/4s, Class 31/1s were also refurbished without receiving ETH equipment. During refurbishment bufferbeam cowlings were removed along with the bodyside band, headcode boxes were plated over and fitted with two marker lights, and any remaining disc headcodes were removed.

Where steam heat boilers remained, these were removed and a concrete block added instead to maintain the weight balance. As passenger work dried up, many of the 31/4s were displaced and found themselves allocated to the departmental sector.

In 1990, to reduce maintenance costs and prevent their ETH-fitted locos being borrowed for passenger work when extra traction was needed, the departmental sector isolated the ETH and removed the jumper cables from some of its 31/4s, resulting in these locos being reclassified as 31/5s. There were also two locomotives classified as 31/6, these had through ETH wiring fitted allowing them to work double-headed with an ETH-fitted loco. Other operators however kept Class 31s active on the mainline and in 2022 it is still possible to see a 31 on the mainline. The Class has also been popular with the preservation movement, with more than 25 examples now preserved.

This Class 31 was the first of its kind to be painted into Intercity Mainline livery in 1990, the same year it gained'Jerome K. Jerome' nameplates at a Bescot Depot open day, named after the English author who was a local to the area. Like most of its classmates, it predominantly saw use on the East Coast Mainline on passenger and postal services, but could also be seen heading BR Departmental workings. Or Telephone - 01242 523117. This item is in the category "Collectables\Model Railways & Trains\Railways & Trains\Locomotives". The seller is "cheltenhammodels" and is located in this country: GB.