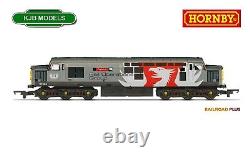 Minimum Curve (mm) Radius 2. Motor 5 Pole Skew wound. Entering service as the English Electric Type 3, the British Rail Class 37 diesel locomotives were built at the Vulcan Foundry in Newton-le-Willows in a Co-Co configuration, based on locomotive designs for export markets. British Railways first placed an order for forty two class 37 locomotives in January 1959, the first of which was delivered in November 1960 and entered service on 2 December with the last of this original batch was completed by mid-1962, by which time further orders had been placed. The last of the 309 locomotives built were delivered to the Western Region on 9 November 1965, originally numbered in the range D6700-D6999 and D6600-D6608. Many Class 37 locomotives were refurbished in the 1980s which extended their operational life. As a result, Class 37 remains in service to this day as one of the longest serving classes on British railways.

Second-hand locomotives have been exported to railways in France and Spain whilst in the UK many locomotives no longer required to work have been preserved. Rail Operations Group operate a fleet of 6 locomotives built between 1961 and 1963. They have been modified to allow them to move EMUs around the network including modifications to allow them to couple with and operate the brakes on various EMU classes without the need for translator vehicles. Built in 1963, the locomotive was initially numbered D6883 but became No.

37183 under TOPs in 1974. The locomotive was renumbered to 37884 in 1988 having been upgraded to class 37/7 specification. This item is in the category "Collectables\Model Railroads & Trains\Railroads & Trains\Locomotives".