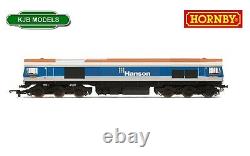 Item Scale 1:76 Scale 00 Gauge. DCC Status DCC Ready 8 pin socket (NOT DCC Fitted). Minimum Curve (mm) Radius 2. The Class 59 is a Co-Co diesel-electric locomotive built by Electro-Motive Diesel in La Grange, Illinois for British customers. A tender for six locomotives was created by Foster Yeoman, operator of Torr Works, for a powerful locomotive with 95% availability. Although Brush Traction and BREL of Britain were invited to come up with a design, only EMD could be the 95% availability criteria. EMD's tender was sufficiently adept at the work required that double heading would no longer be needed, resulting in the order being reduced to just 4. The locomotives were delivered to the UK via Southampton in January 1986 becoming the first privately owned locomotives to regularly operate on Britain's mainline and the first designed and built in the US. After the initial 4 locomotives were proven successful, the Amalgamated Roadstone Corporation (ARC) ordered another 4 which were built by General Motors Diesel Division at their Canadian plant in London, Ontario in 1990. A final order of six locomotives was placed by National Power which were again built in Ontario in 1994 and 1995.

The hugely successful EMD Class 66 is partially a development of the Class 59 and shares many components including its bodywork. 59101 was one of the 4 ARC locomotives to be built in Canada.

The locomotive arrived in Britain in October 1990 and entered service the following month. This item is in the category "Collectables\Model Railways & Trains\Railways & Trains\Locomotives". The seller is "kjb-models" and is located in this country: GB. This item can be shipped to United Kingdom.