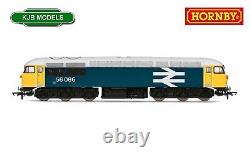 British Rail awarded the contract to design and build these new engines to Brush Traction in Loughborough, who subsequently sub-contracted the construction to Electroputere in Romania, due to the lack of capacity in their own works. The initial 30 locomotives to be delivered from Romania suffered from transit damage and construction deficiencies and had to be extensively rebuilt before entering service. With this in mind the decision was made to build the remaining 105 locomotives in England, British Rail Engineering Ltd manufacturing them at their Doncaster Works nos. The design specification was based upon the Class 47 bodyshell, with the omission of redundant features such as the headcode panel. Air brakes were fitted for the first time in a British Rail engine and the electrics were improved in a number of areas, resulting in a more robust power unit. Strong and reliable performers, the locomotives were popular but needed heavy maintenance, particularly when compared against the Class 66 locomotives that came to displace them in service. The introduction of the Class 60 locomotives saw a gradual reduction in the use of the Class 56 locomotives and with the arrival of the Class 66 locomotives, with their greater availability and lower maintenance, the Class 56 fleet were placed into storage between 1998 and 2004. Colas Railfreight operate a small fleet on a rotating basis and British American Railway Services and UK Rail Leasing have a number available for working. Five locomotives, 56006, 56097, 56098, 56301 and 56302 have been preserved.

56060 was built in June 1979 by BREL in Doncaster. The locomotive received the name'The Cardiff Rod Mill' in December 1992 and ran under this name until March 1997.