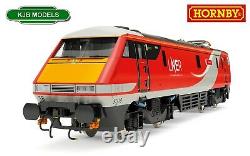 Between February 2000 and February 2009, the locomotive carried the name'Bradford Film Festival', receiving the Project Delta Class 91/1 upgrade in November 2002. On 27 March 2018, the locomotive was named'The Fusiliers' at a ceremony commemorating the 50th anniversary of the Regiment, Representatives from the First and Fifth Fusiliers providing the Guard of Honour, along with Colonel of the Regiment, General Paul Nanson, who officially named 91118. This item is in the category "Collectables\Model Railroads & Trains\Railroads & Trains\Locomotives". The seller is "kjb-models" and is located in this country: GB.