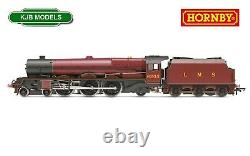 The LMS Princess Royal Class were designed by William Stanier having previously worked alongside Charles Collett for the GWR at Swindon. As a result of Stanier's connections to the GWR the Princess Royal Class shared a lot of characteristics with the GWR's King Class locomotives. 6205'Princess Victoria' was built in July 1935 and remained in service until November 1961. In 1947 the locomotive was fitted with modified valve gear however this was removed again in 1955.