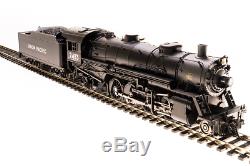 It was an extremely successful design. The USRA Heavy Mikados used pretty much the same running gear as the Light Mik's, but the boilers were 10 inches larger in diameter and they had larger cylinders as well. Tractive effort was about 10% higher for the heavy 2-8-2's. As for the USRA Light Mikados, the USRA built 625 total, with 641 copies built after the USRA ended control. With copies, over 50 railroads used the USRA Light 2-8-2's.