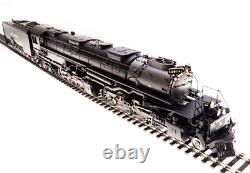 BROADWAY LIMITED 6506 HO UP Big Boy 4014 Tour Excursion Standard Challenger Tender Paragon3 Sound/DC/DCC. 6506 UP Big Boy #4014, "The Big Boy Tour" Excursion, Standard Finish, Challenger Excursion Tender, Paragon3 Sound/DC/DCC, Smoke, HO. PLEASE NOTE: HO SCALE, Minimum Operating Radius: 18 in or greater. Often called The largest steam loco ever made, and certainly a contender for the Worlds Most Famous Locomotive, the Big Boy was forged under some of the most strenuous demands ever placed on a locomotive. The UP Railroad needed a locomotive that could be used to pull a 3,600-ton train over Sherman Hill and the 1.14% grade from Ogden to Wasatch, Utah without the need for helpers.

When the design specifications were complete, it was decided on the use of a simple articulated, high speed, 132 ft. Long locomotive sporting sixteen 68 diameter drive wheels. What they created was the longest and among the heaviest, most powerful steam locomotive legends in the world. And had not the worker at ALCO chalked Big Boy on the side of the smoke box of one of the 4-8-8-4s under construction, a name that immediately caught on, it is rumored that the name of the type would have been Wasatch, for the mountains they were built to conquer. PLEASE NOTE: HO SCALE, Minimum Operating Radius: 18 in or greater FEATURES - NEW Paragon3 Sound & Operation System FEATURING ROLLING THUNDERTM with Authentic Sounds and Prototypical Operation in both DC and DCC environments - NEW Steam from the Whistle!