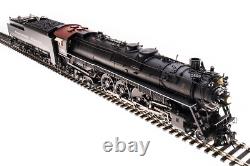 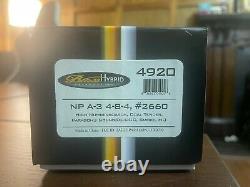 I have for sale a brand new Broadway Limited Imports DCC Sound HO Gauge NP A-3 4-8-4 #2660 Brass Hybrid. This item was imported from America and has been in my collection since it was released.

It is brand new and has not been taken out of the box, nor used. You will need smoke oil to be able to use the synchronised puffing smoke. It can be used without smoke oil but you must ensure you switch off the smoke generator (the manual explains how to do this). Please see my other listings. Please see the below taken from Broadway Limited Imports website.

In 1938, eight Class A-3s (road numbers 2660 through 2667) were delivered from Baldwin. The specifications for these locomotives were identical to the Class A-2s except that each weighed 2,400 pounds more. The eight Class A-4s (road numbers 2670 through 2677) were delivered by Baldwin in 1941, and had the same basic specifications as the A-3s, but were different in appearance, with 14 wheel centipede tenders and vestibule cabs, and they were 1000 pounds heavier. This group of 10 (road numbers 2680 through 2689) were built to the same specifications as the Class A-4s, but turned out to be 16,200 lbs heavier. They were among the heaviest of all the Northern type locomotives ever built, at 508,500 pounds only the Santa Fe Class 2900s weighed more.

The seller is "foomatthew" and is located in this country: GB. This item can be shipped to United Kingdom.