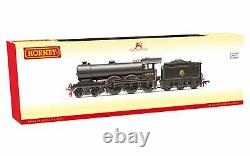 The restrictions on locomotive weight and length were keenly felt by the Great Eastern Railway and whilst James Holden's S46, D56 and H88 Claud Hamilton 4-4-0 designs were not unduly restricted, when he came to consider a 4-6-0 design for high performance express work, the inside cylinder was his only real option. To gain power, Holden was quick to embrace the idea of superheating and so in 1911, the first order was placed for his S69 class locomotive.

Under the GER, seventy one S69 engines were built, fifty one at Stratford and twenty at Wm Beardmore & Co. The large enclosed cab with side windows and an extended roof were a noticeable feature of Holden's design which, allied to the large Belpaire firebox, decorative valance over the driving wheels and short 3,700 gallon tender, gave the impression of the locomotive being bigger than it actually was. Allocated throughout East Anglian sheds, the S69 saw sterling service hauling the Liverpool Street-Norwich mainline trains, as well as the Harwich Boat Trains, Cambridge and Great Yarmouth services.

At Grouping in 1923, the S69 became classified as the LNER B12 and extended its range to Doncaster, Leeds and Manchester. The LNER plans for 2-6-4T engines to operate services to Southend were abandoned following issues with the type's stability and so a further ten B12 locomotives were ordered from Beyer, Peacock and Co to fill the void, the design being fitted with vacuum ejectors, Lenz poppet valves and dual air and vacuum brakes and classified as class B12/2. With large scale upgrading to the permanent way by the LNER, it at last became possible to increase the weight of locomotives and so a larger, round topped boiler pattern, with a bigger super heater was introduced, along with modified valve gear, resulting in a new B12/3 classification.

Further modifications were carried out to the boilers of nine of the twenty five Scottish engines, this resulted in the final variation of the class, the B12/4. During 1944, due to their wide route availability, a number of the B12/3s were utilized to work on ambulance trains hauling air braked, American built stock, mainly in the West Country. To improve the loading gauge, the footsteps were cut back and holes cut into them, making them instantly recognizable in later years. Seventy two locomotives entered British Rail service at Nationalization in 1948, further withdrawals taking place at regular intervals until the last locomotive, No. 61572, was withdrawn in September 1961 and it is this engine that is preserved at the North Norfolk Railway.

Locomotive 61576 was built at Beyer Peacock as a B12/2 and entered traffic at Gorton on August 31, 1928, remaining there until September 20, 1928 when it was transferred to Stratford. Spells at Colchester and Ipswich followed, the rebuild to B12/3 taking place in August 1932. During April 1944, whilst allocated to Colchester, the locomotive was adapted to work with the ambulance trains and it continued in service until January 1959, when it was withdrawn from Cambridge Shed. Maximum curve Hornby 2nd radius + / 438mm+.

We can send a VAT invoice on request. Our VAT Number is 992923082. We reply to all Enquires. Hours of Business Monday - Friday 9.00 a. Saturday, Sunday and Bank Holidays Closed.

742 DCC Ready - R3527. This listing is currently undergoing maintenance, we apologise for any inconvenience caused. The item "Hornby Early BR B12 Class Loco No 61576 DCC Ready Locomotive R3546" is in sale since Sunday, March 21, 2021. This item is in the category "Collectables\Model Railroads & Trains\Railroads & Trains\Locomotives". The seller is "onlineaudioelectricalltd" and is located in Market Drayton.