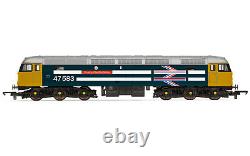 Built between 1962 and 1968, the British Rail (BR) Class 47 Co-Co Diesel-Electric locomotive was once the most numerous class of mainline diesel in Britain with 512 examples. 310 locomotives were constructed by Brush in Loughborough, and the remaining 202 at Crewe. In 2020, 24 of the class remain operational on the national network with more in storage and an additional 31 preserved. Built in October 1964 as D1767 the locomotive was initially assigned to the Tinsley depot. Under TOPS the locomotive was initially numbered 47172.

The locomotive received the name'County of Hertfordshire' in 1979 before being reclassified a class 47/4 and renumbered 47583 in November 1980. In 1981 the livery of the locomotive was updated to mark the wedding of HRH Prince Charles and Lady Diana Spencer featuring a large BR arrow uniquely lined in Red and Blue. This item is in the category "Collectables\Model Railways & Trains\Railways & Trains\Locomotives". The seller is "gaugemaster_controls" and is located in this country: GB. This item can be shipped to United Kingdom.