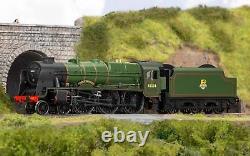 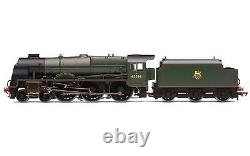 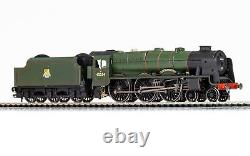 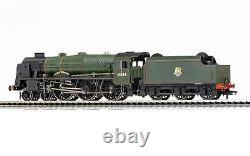 Hornby R3633 Early BR Rebuilt Patriot Class "E TOOTAL BROADHURST" No. 5971 and 5902, into a new class by utilising new frames, spare tenders and an existing type of boiler. A further forty of these'complete renewals' were built in four lots, mainly at Crewe, between 1932 and 1934, with a final ten'new' locomotives, to Lot 96, being built at Crewe in 1934.

In tests, the'Baby Scots' proved themselves to be very good engines, with a tidy coal consumption. Because the re-built locomotives kept the numbers of the Claughtons that they replaced, the numbering system was messy and it was not until 1934 that the LMS renumbered the class in the 55xx range. Two of the original Claughton class bore the name'Patriot', with its deep symbolism and in 1937, with public and private support, the LMS decided that locomotive 5500 should have the name passed to it, allowing the class to be referred to as'the Patriots'. In August 1945, the LMS authorised the rebuilding of eighteen Patriots to 6P classification to meet the post-war needs of accelerated express passenger services. This was achieved by the fitting of 2A taper boilers and necessitated the replacement of the 3,500 gallon Fowler tender with a 4,000 gallon type.

Withdrawal commenced in September 1960 with 45502 Royal Naval Division, the last of the class, 45530 Sir Frank Ree, being withdrawn in December 1965. None were saved for preservation.

Tootal Broadhurst was rebuilt at Derby in April 1933 and re-entered traffic at Leeds later that month. Allocations to Longsight and Edge Hill followed, before the 6P conversion with the 2A tapered boiler came in December 1948, the penultimate Patriot to be converted. Tootal Broadhurst was withdrawn from Crewe North in May 1964 after a period of storage. This model is Brand new and never been removed from its packaging. Directly linked to my retail premises in Eastleigh High Street.