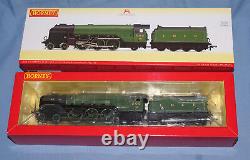 This is a Hornby R3832 00 gauge model of BR Thompson A2/3 Pacific 500 Edward Thompson, in LNER Green. The A2/3 Pacifics came into existence as a result of a war time need to simplify and standardise the LNER Locomotive fleet, the design of the A2/3 pacifics was based on the rebuilt P2 locomotives, albeit with a number of modifications. The first A2/3 was built in 1946, just a month before Edward Thompsons retirement.

500 Edward thompson entered traffic 24th May 1946 at Gateshead before changing sheds three times in the next four months, finally settleing at Kings Cross from the 12th September 1946. At nationalisation Edward Thompson was given the number E500, before being renumbered 60500 on the 7th October 1949. 60500 was moved to Peterborough New England shed on the 4th June 1950, where the loco remained untill withdrawal on 16th June 1963.

The seller is "50029renown" and is located in this country: GB. This item can be shipped to United Kingdom.